The Franken Region and its Wine

Germany is typically associated with sweet white wines, but in reality many Germans prefer a crisp, dry white. The dry whites of the Franken region, a product of its unique and richly varied terroir, have a particular following. The famous writer and polymath Goethe himself is known to have been fond of wine from this region. In 1806 he wrote to his wife, “Send me some more Würzburger; for I have no taste for any other wine, and I become irritable when I must do without my favorite drink.”

Franken today is a wine-producing region with a bright future: the area of land given over to grape cultivation has grown to around 6500 hectares from only around 3500 hectares in the early 1980s, and the volume of wine produced continues to increase year after year. 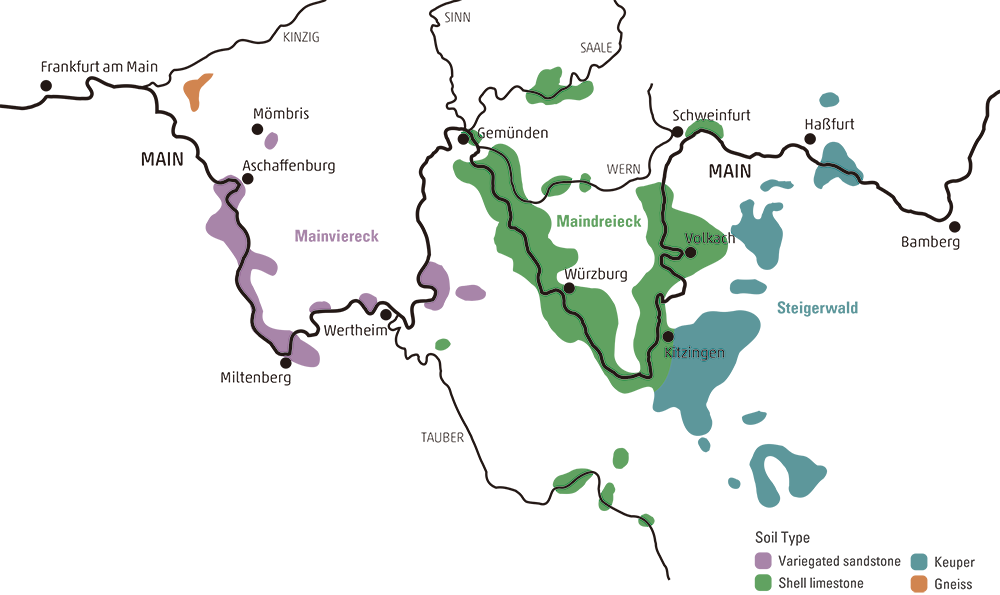 Franken (or Franconia) is a region close to the heart of Germany, situated east of Frankfurt and northwest of Nuremberg. Grapes are cultivated on the north-facing slopes of the valleys of the river Main and its tributaries as they meander between Haßfurt and Aschaffenburg. The sides of the valleys are steep, but even slopes with a gradient of up to 60% are used for vineyards.

This is a relatively cold region with a short growing season. A dry continental climate means a striking contrast between the heat of summer and the cold of winter, while the average annual temperature is below 10°C. Spring and autumn bring unpredictable weather which can severely damage the year’s crop, but the hot, dry summers enable Franken to produce wonderfully dry, full-bodied wines unlike those of any other region in Germany.

The soil of the Franken region (see above diagram) also plays its part. With origins in the Triassic period (around 250 to 200 million years ago, when the first mammals were beginning to make their appearance), this is a richly varied soil which can include sandstone, limestone and Keuper (marl). The soil type of each area lends particular characteristics to the wine produced.

Franken has three wine producing areas defined largely by the river Main and the surrounding topography. Each has its own distinctive soil and its own particular character.

■ Mainviereck (the “Main square”):
Dominant soil type: variegated sandstone
This is the westernmost of Franken’s wine areas, hemmed in on three sides (south, east and west) by the river Main. The northwest part of the Mainviereck has a gneiss soil, and cultivation here is limited in general to the Riesling grape variety.

■ Maindreieck (the “Main triangle”):
Dominant soil type: shell limestone
An area towards the middle of the Franken region, hemmed in on the southwest and southeast by the river Main. Over 70% of Franken wine comes from this area. The city of Würzburg, with its famous Würzburger Stein vineyard, is at the heart of this production. The vineyards that have particularly captured Hermann-Josef Bender’s attention, however, are those to the south of Würzburg in Sommerhausen, and those in the “Main loop” (Mainschleife) around the town of Volkach.

■ Steigerwald:
Dominant soil type: Keuper (marl)
This is the wine-producing area that lies furthest to the east. Wine produced here exhibits a characteristic minerality owing to the soil. This is also the area most affected by the continental climate. Wiebelsberger Dachs is a vineyard that Hermann-Josef Bender finds of particular interest in this area.

The differences between and within each area are what makes Franken wine such a delight to discover. Even when the same grape varieties are used, differences in the soil and in the meso-climates produced by specific local conditions (e.g. bends in the river, or the particular steepness of the slopes) give unique characteristics to each wine produced.

The grape most closely associated with Franken wine is without doubt the Silvaner, but cultivation of this variety has dropped since the 1970s when milder wines were more popular. Today Müller-Thurgau is the predominant variety in the region. Nevertheless, the dry-tasting Silvaner grape is well suited to the particular character of the Franken soil, and there is a growing effort from wine-makers to restore it to its place at the top.

Other grape varieties cultivated in the Franken region are Bacchus, Scheurebe, Kerner and Riesling for white wine, and Domina, Spätburgunder and Portugieser for red wine. Riesling, the best-known of German grape varieties, is less abundant here than in other regions. This is due to the fact that it is a late-maturing variety, and is thus difficult to cultivate in Franken’s short summers.

The major varieties of grape used for red wine are also relatively challenging to cultivate in this climate, but with an eye on the Odenwald Foehn, the warm southwest wind that flows into the region from the warmer Freiburg area, passing along the Rhine valley and through the Odenwald mountains, Hermann-Josef Bender has thoughts of reviving an ancient Franken variety called Blaufränkisch. We can each look forward to the day when he will pour us a glass of that Blaufränkisch, and we can taste for ourselves a wine reputed for its velvet minerality and light tannins.

The squat, flattened round bottle known as the Bocksbeutel is a trademark of Franken wine. Its use is reserved for wine from the Franken region, with only a small number of recognized exceptions.

A prototype for this style of bottle can be found in a Celtic earthenware vessel from 1400 BC that was unearthed in Wenigumstadt, a small town in the Franken region near Aschaffenburg. Since such flattened vessels were more convenient to carry than cylindrical bottles, they were used from ancient times as water flasks for travel and outdoor activity such as work in the fields or hunting. The Romans further developed such vessels in ceramic and glassware, and finally the current shape of the Bocksbeutel emerged.

The origins of its use for Franken wine lie in the first half of the 18th Century. At that time “fake” Franken wine of inferior quality had appeared on the market. In order to protect Franken wine’s excellent reputation, wine produced at the Bürgerspital, Würzburg’s traditional winery, was bottled in Bocksbeutel and sealed with a special seal. The bottle shape thus became synonymous with Franken wine.

These days it is also common to find Franken wine bottled in cylindrical bottles of the Bordeaux or Burgundy type, and this has no bearing at all on the quality of the wine.